Our Latest Kickstarter - The Child Thieves For Old-School Essentials

Good afternoon, all!
As I write this we are one week away from the ending of our 4th Kickstarter for the Old-School Adventures Retro Adventure Game! This is, again, apart of Zine Quest! To date we have published 2 adventures focused on Basic level play, 1st - 3rd level. This year we are upping the ante a bit and going with an Expert level sewer and dungeon crawl. At the time of this posting we are just shy of hitting a stretch goal of our first color cover. You can see a list of stretch goals  below.
About the Module:
In the poorest of districts of the city a plague of rats has come from the sewer every year at the same time for many years. During a more recent occurrence a wandering piper happened along, claiming to have the magical ability to control and lead the rats away. The people gladly paid his small fee. During subsequent years the piper has arrived in the city close to the time that the rats swarm, but his price had gradually escalated. This year, the people could not pay him what he wanted for his services and he swore vengeance for their parsimoniousness. One night while the district slept, the children were taken. Not one or two, but every child in the district. In the morning claw marks were found on windowsills and in the wooden floorboards of children's bedrooms, like those of a rat, but much larger. Some prints of similar claws were found at a grated sewer entrance. What's more, a crude pendant was found in one child's room, its chain broken. The symbol on the pendant was the sigil of the Demon Prince, Arimaniux patron of sewers and plague. Now the people fear the worst. They have beseeched the city leaders to find and hire help to descend into the sewers and take their children back from the suspected cult before it is too late. 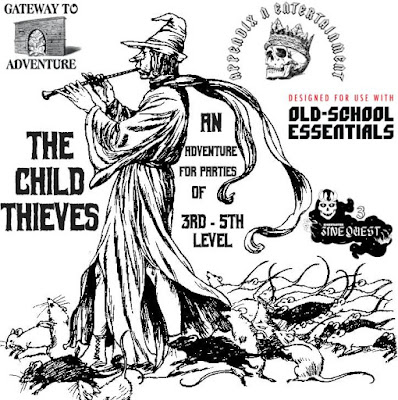 Stretch Goals:
$1200 - More art (funding level only gives up the cover and 2 more pieces of new art for the project this will fund 3-4 more illustrations.)
$1500 - Cover image will be colorized!
$1700 - More interior art!
$2000 - The new Demon Prince Arimaniux will get a full write up and art in the appendices of the adventure!
$2200 - Even more interior art!
$2500 - Wererat class and advanced genre racial stats added to the appendices!
$3000 - New cleric spells and rituals added to the adventure and the appendices!
$5000 -  A complete second zine! Will will complete writing and print The Book of Sorcery featuring our upcoming Sorcerer class, new spells, new rituals (as presented in Octhorrorfest,) and new magic rules for Blood Magic. All individual backers will get a copy in digital. All individual backers getting physical rewards will also get a physical copy of this zine. Retail/Distribution backers will have the opportunity to buy copies at the same discount they are receiving at their tier. Note, if you back for 2 copies of The Child Thieves you will receive only one copy of The Book of Sorcery, additional copies will be extra.
500 Backers - If we reach 500 backers. Appendix N Entertainment will print a new edition of The Pied Piper of Hamelin by Robert Browning with the original Kate Greenaway illustrations. This will  be printed as a limited edition Kickstarter exclusive for individual backers of this project, similar to our printing of The Horla that was an exclusive with last year's Kickstarter for Hidden Hand of the Horla. You will only receive one copy of this Kickstarter exclusive, even if you have backed for 2 copies of The Child Thieves. Additional copies will not be printed.
Personally, I would love to hit at least $3000 and get new cleric spells and rituals in the appendices!

You can back "The Child Thieves" right here! 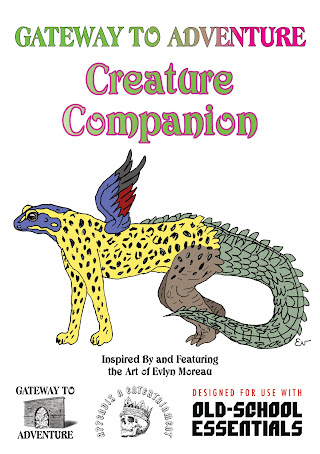