Unboxing the D&D Starter Set... One Month After the Fact.

Good afternoon, folks.  If you pay attention to this blog, you will know that I have been meaning to do
post on the unboxing of the new D&D Starter Set and that, due to the video falling through, I made the decision to wait until I had played the game.  So, yesterday, I had the opportunity to play it.  First off, I will post a few pics from our unboxing, just so you know that this actually happened, also it is proof that these Michigan OSR guys +Adam Muszkiewicz and Ryan Thompson really exist.

In case you have not had the pleasure of meeting either of us, Adam is on the right with the Mountain Dew and super cool Star Wars backpack.  I am on the left in in the golden rod tee, Hunter Thompson hat and Fu-Manchu 'stache.  Yeah, we're pretty much the awesome.

So, just to run down what I remember of what we did here.  Right off the bat we opened the box and bitched about the dice.  They aren't precision (I think we assumed that anyway) buy neither are they anything special.  They were six blue pearlescent dice.  That's it.  Not even a full set by today's standards.  No second D10 to make a D100.  I see what they did here, they were six blue dice to make us remember the set that came in earlier boxed sets, but they were weak by comparison.  One HUGE factor that we noticed, is that there is ONE D20.  That might seem normal, but as there is a mechanic in here that makes you roll 2D20 (Advantage/Disadvantage) and take the better or worse roll (depending upon whether you are ruled to have an advantage or disadvantage.)  Yes, you can roll the same d20 twice, but with everyone doing it (especially if you are truly using this Starter Set as your first RPG and thus only owning this ONE D20) will eat a fair amount of time.  Bottom line, if you have to roll 2d20 in a game and that game provides you with dice, it should come with 2d20.

That said, between that unboxing and actual play, I like the Advantage/Disadvantage mechanic (as described in the above complaint) and I can see it being used as a house rule in an Old School game.

Pardon me for being brief with all of this, but I am certain that most of what I am bringing up here has been covered elsewhere.

During the un-boxing and still holds, is that Adam and I were disappointed the ability score bonuses. We both seemed to be hoping that WOTC would be pushing it back to the B/X ability score modifiers, but we ended up with a repeat of the D20 System scaling.  I can get over that bit, but it isn't my preference.

Personally, I like the way that ability checks work (though the game seems a little too Check-centric ala D20 to me,) and that aspect reminds me of the way that Castles & Crusades works.  The difference here being that rather than adding your level to your checks, you add a bonus based upon what proficiencies you have. By the same token, the game uses six saving throws, based upon the six ability scores, also just like C&C.

Combat itself is pretty straightforward and I'm OK with how it works.  That said, I despise how cut & dry the mechanics of "conditions" are.  It makes it less role-playey and more "gamey."  This has been an issue since 3E and remains here.  Dislike. I prefer "conditions" to be in the realm of DM Fiat.

Resting.  Here is one of two things in this game I despise.  Short rest & long rest.  Short rests are little things that take an hour and you can role your hit dice to regain HP.  Um... yeah.  A long rest is your entire night's rest.  During this you get ALL lost HP back.  That's right.  A good night's sleep gives you back all of you HP.  I HATE this as both a player and Judge.  Hate, hate, hate.  Another area that takes the RPG into the realm of "game" and out of the realm of simulation.

Again hate what they did with it.  I'm always down for Ritual Magic rules, but not like this.  I dislike that you have some spells (mostly utility spells) that you can now cast without using spell slots if cast using a ritual allows you a free spell.  Included in these rituals are Identify, Comprehend Languages and Detect Magic.  Also, you can use your spells per day to cast any of the spells you have memorized. This is another modern mechanic that removes us from the aspect of requiring resource management into the realm of instant gratification (a side affect of our modern world I suppose.)  Lets see what Abraham Simpson has to say about it. 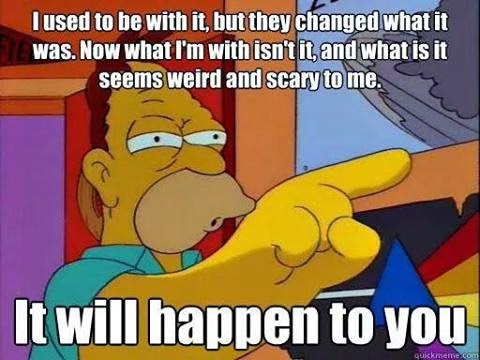