Note the conversation I write about below and the start of this post initially happened over three weeks ago. Life and business at work got in the way of getting this complete! As this update to the post, it has been over a month since I've had a chance to get anything up here!

During a break at work, I had a text conversation with +Reece PC that sparked some thoughts and ideas for this post. I'm not really sure that I've read anything like the advice that I'm going to propose here, though I think that there are some gamers out there who already believe in exactly what I'm about to write. For the record, where examples are given, I am writing from the standpoint of D&D (especially early D&D,) clones and near clones. Examples given will be based upon the tropes of OD&D, AD&D, Classic D&D and the inspirations for these. However, the points made should be clear to those running/playing other RPGs.
Everyone knows that Referees put in prep time. The prep time might be physical, writing up cities, NPCs, map making etc, IF that is the type of prep that the ref feels they personally need. I am of a more minimal PHYSICAL prep mentality. I'm in the other camp of Refs. Thinkers that prefer a more freeform game. Often min prep Refs are looked at as if they do nothing because of the sandboxiness of their campaigns. This isn't true at all. While not as much is written in a hard format, minimal notes to spark thought process, tons of reading (modules, fiction and historical texts) and thinking about the possible ways the players can move the game consumes, likely, just as much time as the heavy physical prep does. Ref prep is time consuming, whatever the method. 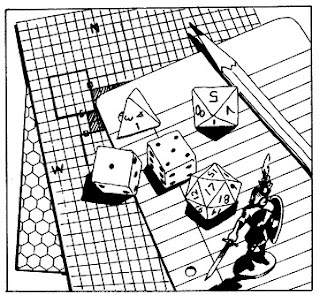 Likewise, players have a level of prep, albeit at a far lower level than that of a Referee. Players have a buy in to play, just a as a referee does. That buy in, however, varies depending upon the game being played, and possibly the style of campaign being run, whereas the Ref's prep will be somewhat similar regardless of system (though some systems require heavier lifting.)

What the Referee Owes the Players and the Game:

Referee's of RPGs have their work cut out for them regarding what they owe to buy in to the game. Referee's need more background knowledge than the player's going in and they need to establish a setting and a general plot to kick off the campaign. Regarding the general knowledge, this referees to the setting or implied setting and it's resources. For the purposes of this post, we'll presume that we are using a retro-clone rule set, Swords & Wizardry Complete, but utilizing "early genre D&D tropes and the OD&D/AD&D implied setting. 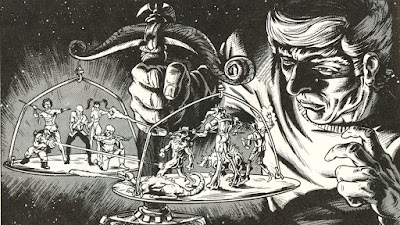 So, what does a Referee running this sort of campaign owe to the players and the overall game being played? First off, the Ref needs to establish what the biggest influences of the campaign will be. We've already established that the system will be Swords & Wizardry Complete. We also know that the setting will utilize fiction taken straight from early D&D rules. This meaning tropes presented in the early D&D writings. Meaning that the resources for the fictional setting can easily be found in the OD&D books and AD&D books (as the AD&D books present much of this information more cleanly, most especially the Monster Manual for racial and creature information.) The Referee should look over these sources again to make certain that they are familiar. Following this, the referee should look at other fantasy fiction that is influencing the campaign. Since this is a D&D based game, Appendix N literature is already influential, as much of it is found directly in the rules. A cursory scan of Appendix N should be able to tell the Ref which works have been most influential on their own view of fantasy and world/adventure creation. The Ref might make note that since a three axis alignment system is in use, a cursory look at Michael Moorcock or Poul Anderson's writing is a good idea for the players. The Ref might also look online for any articles or blog posts that give this link and a better explanation to what alignment really is in these works. The books (rulebooks and fiction) and online articles should be made available to players who may not be familiar with them. This will likely be more important for newer players. Additionally influences from fantasy, horror or science fiction films (and non Appendix N books) might be addressed.
Strictly for this example, we will say that the Referee in question decides that this "genre D&D" styled game is going to be influenced by the OD&D and AD&D rulebooks, Michael Moorcock's "Elric" series, Jack Vance's "The Dying Earth" (primarily for it's take on magic) and a sense of adventure taken from Fritz Leiber's "Lankhmar" series. Additionally the Ref notes that for racial information for demi-humans, the works of Tolkien with provide a reasonable basis. These are all direct influences on D&D taken from Appendix N. The referee also Realizes that the world that the PCs will exist in is also influenced by the films "The Beastmaster" and "Dragon Slayer." All of this information should be presented to the players and, where possible, made accessible to those that lack the background, even if it might mean cliff notes variations. The Referee should also decide upon which "random" generators they will use to "fill in the blanks" when such a need arises. Such works as New Big Dragon's D30 Sandbox Companion and Judge's Guild's classic Ready Ref Sheets are excellent resources for Ref's who need to act on the fly.
Having all of this information in hand is great preparation, and having it available for players to prep as well can result in a very rewarding role playing experience. As a note, especially for Referees with a "heavy prep" mentality, no matter how much you prep and write out your own notes and references to your source material, if the players are unfamiliar with the source material or world of your choosing, they will not easily become immersed in the game.
So, here is a short list of what the GM is responsible for, note a few items that are self explanatory, and not discussed in the preceding section: 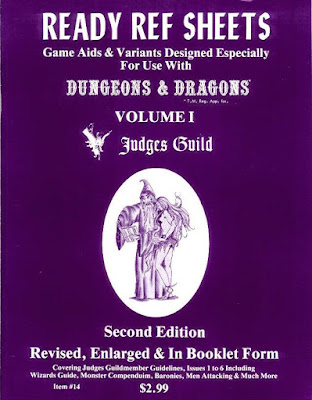 ﻿
What the Players Owe the Referee and the Game:

Player prep is just as important as Referee prep when it comes to game time. If you aren't prepared for your game, then you can't place blame elsewhere for any issues you might have. You owe as much to the game and it's story as your referee does. Everyone at the table is accountable.
I will tell you that first and foremost a read through of Appendix N literature will greatly improve your game. It will get you more involved in the reasons that your character's abilities function as they do. It will help you with the "in game" meta-reasons that everything works the way it does. Remember, if you are playing D&D or it's simulacra, you are playing a game that was designed to emulate that list of fiction! Knowing the fiction can only aid you. I literally just had a conversation with one of my players about this very subject. Thanks Dave. It helped to put what I wanted to say here into perspective. Additionally you need to know the rules of the game you are playing, to a degree, and the house rules that your Referee is implementing.
If you know the inspirational material for the game and the inspirations for your Referee's world, you will have a far better time, and be able to create a far better character, than if you do not. Additionally a basic understanding of history and pre-modern era combat can be beneficial, especially if playing an old school style game, more so if you play combat oriented characters.
If you really want your character to shine, implementing roleplaying elements appropriate to the type of character you are is one of the best things to do. These can be draw from both literature and history. I will cite Clerics and other "holy types" as being a major issue here. Far too often I see players playing clerics as combat healers only. The majority of role playing that happens regarding faith is "I go to the temple and pray." It's both boring and lazy. If you're going to be boring and lazy about your character, you should expect the same out of your Ref's game! Much better if you find mythological deity and look up the rituals associate with them.
So, if you have a Cleric that worships Athena, look up the rituals they ancients performed to the goddess and role play them! If you play a Fighter, look at Fritz Leiber novels or Robert E. Howard stories and do some research into historical combat and western martial arts! If you're playing a Thief, read up on actual lock picking and espionage and pick up Leiber's Lankhmar stories, the man literally invented Thieves Guilds in them. If you're playing a Magic-User read "The Dying Earth" by Jack Vance. That book is where D&D's entire magic system comes from and explains the actual metaphysics of how spells of the Vancian type operate! Playing a demi-human? Do another scan of Tolkien's works, unless the Ref tells you that their demi-humans are based on something else.
Now, I've had players tell me that adult life doesn't allow for the time to do these things. That is B.S. If the referee has time to prep in their life, so do the players. It really doesn't take long. 5 - 10 minutes a day or 10 minutes every couple days can make a huge difference! What's more, in this day and age, there is a ton of material available right in front of you on the internet. It will cost nothing more than what you are already paying for that service to learn a bit about folklore, mythology, ancient combat etc. Even the races and classes and their inspiration can be found online. Hell, many games even have SRDs available or free versions that can be downloaded, to learn the mechanical side of things without having to shell out the cash.
We all, Referees and Players owe it to our games to make game time better and more immersive for everyone at the table. Ask  yourself, if you don't have a little time every week to devote to making your game better, how do you have the time to play it?
Posted by Ryan J. Thompson at 5/27/2016 03:50:00 PM